Congresswoman Jackie Speier is fighting for an Equal Rights Amendment to the U.S. Constitution

19 Mar Congresswoman Jackie Speier is fighting for an Equal Rights Amendment to the U.S. Constitution

Posted at 22:05h in News by Liz Tunquist

Rep. Jackie Speier wants to complete the fight for women’s equality that began almost 100 years ago in the U.S. — and she thinks this is a good year to try it.

Women in Rwanda, Iceland, Vietnam and 131 other nations have constitutionally guaranteed equal rights, but American women do not, and activists have been pushing for decades for passage of an Equal Rights Amendment to the U.S. Constitution.

It’s among the issues gaining momentum from the rise of American women in civic participation, including the Jan. 21 Women’s March on Washington. Polls show a majority of Americans falsely believe the Constitution already guarantees women equal rights. “If there ever was a time when it was right for us to finally get serious about passing the ERA, it’s now,” Speier, a California Democrat, said in an interview with USA TODAY. “We have awakened a sleeping giantess.”

The battle is more than symbolic, says Speier, with implications for how gender-based violence and workplace sex discrimination are addressed and litigated; for corporate standards involving accommodations for pregnant women; and for guaranteed access to prenatal care and contraception. It could also force a narrowing of the gender imbalance in top leadership roles. In countries with an equal rights amendment, women are represented in government in greater numbers. The U.S. ranks 104th, behind countries like Burundi, Serbia and Iraq.

“We think we’re so enlightened and ahead of the curve and, frankly, we’re behind,” said Speier, who is sponsoring a bill to smooth ratification. The fight for the ERA fizzled in 1982, when it fell three states short of the 38 needed to ratify. With lawmakers in Illinois, Nevada and Virginia now moving to ratify the amendment, Speier’s bill would restart the expired deadline to add the language to the Constitution.

The 14th Amendment that guarantees equal protection does not cover sex discrimination. In 2011, now-deceased Justice Antonin Scalia made clear the Constitution does “not require discrimination on the basis of sex. The only issue is whether it prohibits it. It doesn’t.” Justice Ruth Bader Ginsburg has said if she could choose any amendment, it would be equal rights for women because “legislation can be repealed. It can be altered.”

That unpredictability is underscored by battles brewing in Congress. Republicans are seeking to defund Planned Parenthood, the nation’s biggest provider of health services to poor women. A bill to replace Obamacare may lead to rule changes about whether insurance companies are required to cover maternity care. At a recent congressional hearing, Rep. John Shimkus, R-Ill., asked why men should have to pay for women’s prenatal care. This is against a backdrop of sexual harassment claims in the U.S. military and at companies including Uber, Tesla, Jared and Kay Jewelers.

“If there’s ever been a time that people can see they make different legislation for women than for men, we see that now.” said Molly Murphy MacGregor, head of the Women’s History Project. Her thoughts echo those of the ERA’s original sponsor, Alice Paul, who in introducing it in 1923 said: “We shall not be safe until the principle of equal rights is written into the framework of our government.” 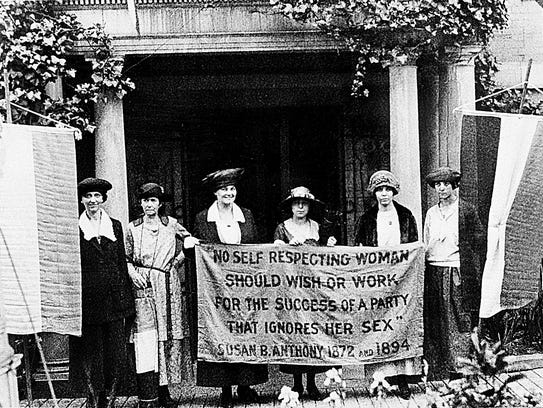 Suffragettes march for the ratification of the 19th Amendment granting women the right to vote at the Republican National Convention in Chicago in June 1920. Chief organizer and author of the Equal Rights Amendment Alice Paul stands second from right. (Photo: AP)

A big part of the challenge is organizing. Having already brought millions of women together, the Women’s March provides an opportunity. On International Women’s Day, its leaders organized boycotts, even forcing the closure of a few school districts to protest President Trump’s policies. Yet critics say it was a lost opportunity. “If you’re going to do a power move, you have to couple that with a clear demand,” said Catherine Tinsley, an expert in gender leadership at Georgetown University.

For instance, the Occupy Wall Street movement that protested corporate greed failed because “you can’t just have anger,” Tinsley said. “It has to be something everybody can unite behind.” By contrast, in 1975, the women of Iceland went on strike, refusing to work, cook and look after children for a day and flooding downtown Reykjavik to demand equal rights and pay. The next year, Iceland’s parliament passed a law guaranteeing equal rights for women and men.

Even if women coalesced around the ERA, there’s little indication House Speaker Paul Ryan, R-Wis., would ever bring it up for a vote. At a minimum, Speier needs a Republican co-sponsor, which she does not yet have. Kari Winter, an expert on gender and protest movements at the University at Buffalo, said there’s “a little piece of hope” the issue will advance. “The misogynistic tenor of official Washington and the alt-right is really waking women who wanted to have the luxury of ignoring politics,” she said.

While the spotlight is often on the wage gap between men and women, the most striking imbalance is when it comes to leadership. Women account for just 20% of members of Congress and just 4% of Fortune 500 chief executives. Men outnumber women in senior positions more than 2-1 among top White House staff appointed by the Trump administration so far.

In the 1970s, opponents like Phyllis Schlafly, the leader of the conservative Eagle Forum, argued that passing the ERA would deny a woman the right to be financially supported by her husband; women could be sent into combat; and abortion rights and gay marriages would be upheld. Some industries also opposed it because it might cost them more money.

Last year, Schlafly passed away and “many of the arguments they used then are gone” said MacGregor.

Yet, even as some states advance the amendment, there are similar objections. On the first day of Women’s History Month, Nevada passed a bill on a party-line vote, with critics saying it could lead to taxpayer-funded abortions and women serving in the draft. Others say equal rights have already been achieved. 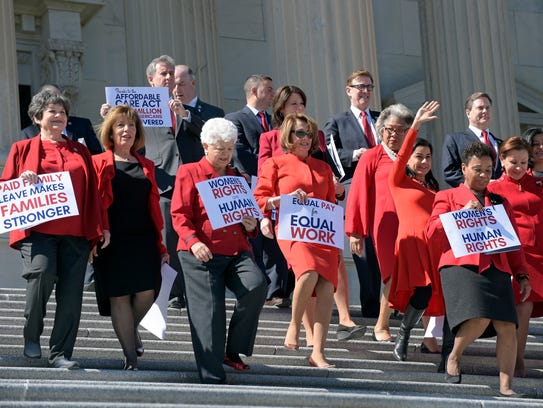 Toni Anne Dashiell, who founded a counter protest group called Right2Speak, said the amendment isn’t necessary. “The overwhelming majority of people agree that we are equal,” she said. “Why do we need a piece of paper to say that’s the case?” As a 64-year-old woman who lived through the 70s, “we really have made major headway,” said Dashiell. “I hate being told on a piece of paper you have to do this. I want to do it out of respect.”

Another criticism might be that it could create new legal hurdles for companies. “The argument on the other side is this will generate more litigation. Darn right it will, and why should one worker be treated different than another worker doing the same job?” said Speier. In other cases, an Equal Rights Amendment could have prevented discrimination in the first place, she said.

For instance, in 2014, the Supreme Court heard a case involving Peggy Young, who was forced out of her job at UPS during her pregnancy because the company was not required to reassign her temporarily to a job that did not require heavy lifting. That’s despite the fact that it was legally required to reassign workers with job-related injuries.

In her book, Equal Means Equal, Jessica Neuwirth, ERA Coalition president, says pregnancy discrimination is based on the presumption “clearly based on sex” that “a worker is someone who does not become pregnant.” An ERA “would require recognition that women and men have biological differences and that the workplace cannot be structured solely around the biology of men,” she wrote.

Click here to view the article at USA Today.